Who Is Kitty Zombie?

The story of Kitty is a long one, so I will give you an abridged version. Kitty is kind of like the Herman Munster of Zombies. But the only thing that was ever replaced was his brain. For whatever reason, his creators thought it would be a grand idea to take out pieces of his noggin and replace them with pieces of a dogs brain. Well, dog is a little too much of a compliment. Anyways, they thought it would be easier to train an Army of Zombie Shock Troopers if they mixed in the brain of a puppy to the mind of a killing machine. Boy were they wrong! Needless to say, the project is currently on hold until they..err…iron out the kinks. 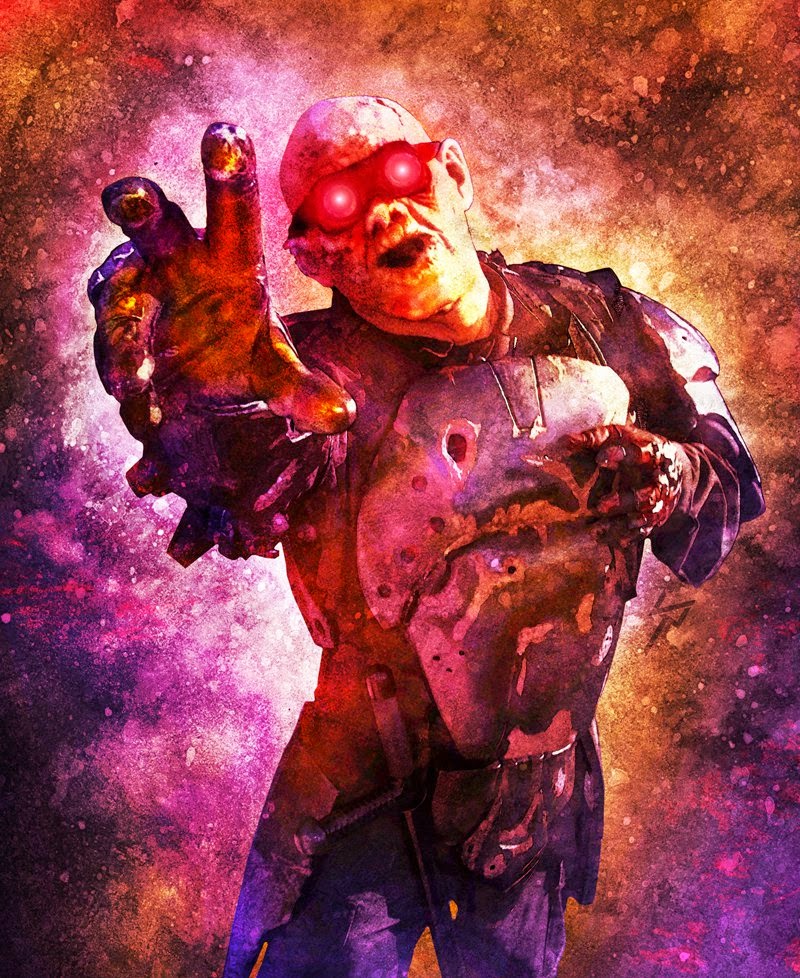 Here is an interview Kitty did for the wonderful crew over at http://www.horrorsociety.com

Thanks guys for letting me repost this! Well... this week's Horror Freak is none other than Kitty Zombie!

I'm sure many of you in the Chicago area have seen this armor clad, helmet wearing zombie out and about at many horror events, haunted houses and conventions. From being a celebrity guest judge at Flashback Weekend, to rounding up people off the streets for the Zombie Bowling event, ice skating at Millennium Park, or just being out and about freaking people out and amusing them at the same time.

He has been a part of the Chicago Horror scene for years now and we had the chance to catch up with Kitty and ask (well try to ask) him a few questions.

Unfortunately, Kitty can not speak too well other than a few grunts and groans, so we are also pleased to have Geoffrey Graves here as his translator. Geoffrey has also been a part of the horror and haunt scene for many years now, and I figured I would ask him a few question as well. So... here is Kitty Zombie!!

So thanks for being the Horror Freak of the Week Kitty, I appreciate it!
**Kitty bounces a little, hooting in happily and clapping his hands**

So first off, how did you become a zombie?
**Kitty starts making noises and throwing his arms around**
Well, since Kitty does not talk, I (Geoffrey) will help translate for you. Spend enough time with Kitty, and you'll be thankful for the lack of talking! The story of Kitty is a long one, so I will give you an abridged version. Kitty is kind of like the Herman Munster of Zombies. But the only thing that was ever replaced was his brain. For whatever reason, his creators thought it would be a grand idea to take out pieces of his noggin and replace them with pieces of a dogs brain. Well, dog is a little too much of a compliment..*Kitty gives a disapproving "UGH!"* Yes Kitty I know.. you're a good Kitty... Anyways, they thought it would be easier to train an Army of Zombie Shock Troopers if the mixed in the brain of a puppy. Boy were they wrong! Needless to say, the project is currently on hold until they..err...iron out the kinks.

I assume that your favorite movies are zombie flicks right? Whats your favorite?
**Kitty gets very animated and vocal**
Well it's funny you say that. Some of his favorite movies ARE Zombie movies... but believe it or not he laughs when the zombies get popped. So to speak. His three fave zombie movies are Shaun of the Dead, Zombie Strippers, *Kitty- WOO HOO!!!!* and the grand daddy of them all, Night of the Living Dead! OH! and before he smacks me in the back of the head, he wants everyone to know that one day, he plans on walking through the Lincoln Tunnel, through the sea of swirly twirly gum drops, pass through the seven levels of the Candy Cane forest, and go meet Buddy elf and Santa...gawd help us all!


Aren't you afraid of someone shooting you in the head? I know there are some zombie hunters out there!
**Kitty just looks..head cocked to the side**
"Umm, not really actually. First off, he wears a German WWII helmet so his head is protected. WHY does he wear that helmet? I have no idea...but he seems to like it. We think it came off his first meal..*Kitty slurps and licks his lips*
The other big reason, is that he really IS a lovable zombie. I know I know....how the hell does that happen? Well, ask the puppy! lol"

Does Zombie Army Productions pay you Kitty, or just feed you brains every once in a while?
"Zombie Army Productions does pay Kitty for some events. In fact, they have arranged for Kitty to be at The Fear Haunted House at Navy Pier at the beginning of most nights the haunt is open in October. So don't forget to come by and say hello. Otherwise Z.A.P. is just glad kitty is on THEIR side! lol"

Got anything planned for the future Kitty?
"Kitty actually has a page dedicated to that on his website www.kittyzombie.com. You can also see videos, pictures, and all sorts of Kitty happenings. Among some of the future projects will be a number of photo shoots with a number of beautiful ladies in the haunt/horror industries including Chicago's own Fango Spooksmodel Nora O'Sullivan! And if you all haven't voted for her, go vote! lol.He will also have a section on his page called WWKD. Yup.. you got it.. "What Would Kitty Do?". lol. The premise is that someone asks what Kitty would do in a certain situation, and Kitty will video tape the results! That will be a LOT of fun and a great way to get the Amazing Fans of Kitty involved more. OH! Another thing he is excited about is that he is working with the Bristol Renaissance Faire to do a zombie day there during the summer! THAT will be a great time! Zombies in period costumes? priceless!"

Now a question for you Geoffrey.. is it hard to lug Kitty around to these events sometimes?
"Oh without a doubt. I'm pretty high maintenance, but this guy? WOW! He brings so much stuff you would think he packed a house to go with!"

You are involved with the Haunt scene right? Tell us what you do... effects, props, etc..
"Well I personally have been in the haunt industry for longer than I like to think about. (It makes me feel old! loL) I have been key make-up for Fright Fest in the past, worked on Universals projects and I still have props and custom masks at Knotts Scary Farm every year. I started out as an actor, went into make-up and effects, went on to set design, and have come full circle back to the acting and effects work. I also have a company that helps haunts, events, and business brand their product. www.spookybuttons.com. Who would have thought that I would become a button advertising business in the haunt/horror realm."

Same for you Geoffrey, any sort of events happening soon?
"Oh my! TONS. I will be taking Kitty to HauntCon in Milwaukee at the end of this month, Acen in Rosemont, various zombie marches, and there is a big event Sunday of memorial day weekend. Retro Zombie Tiki Terror. I have teamed up with Kitty, www.ZombiePinups.com , Zombie Army Productions, and www.chicagozombie.com for this one. Our great friends at Tiki Terrace http://www.thetikiterrace.com/ are letting us use their amazing resturaunt and show area. It's like walking onto the set for Scooby Doo!! For more info on that you can hit www.retrozombietikiterror.com. And if you can believe it, we are ALREADY selling tickets to the event! It's going to be something special, I'll tell you that much. lol"

So who gets more of the girls... Kitty or Geoffrey?
"HA! Kitty by far! When Kitty is around... I don't even EXIST! lol"